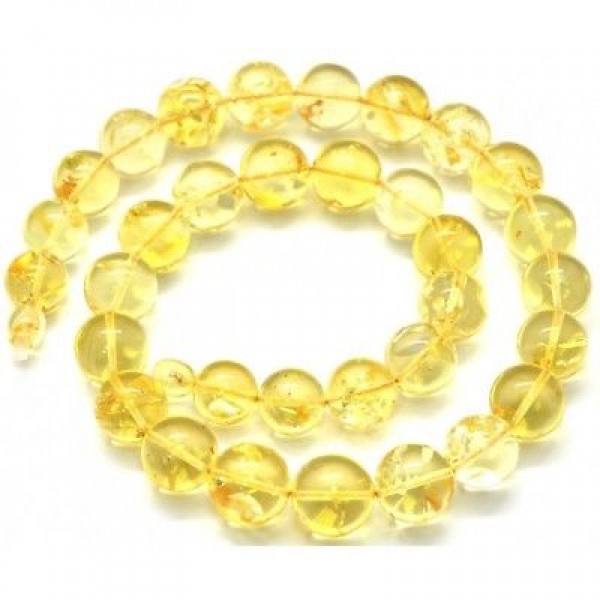 Baltic amber is an oxidised resin of ancient trees that grew approximately 44 million years ago in Europe. What is now the Baltic Sea was once a wide plain with forests of conifer trees. During the Eocene Epoch more than 34 million years ago under an intensely hot climate the conifer trees exuded vast amounts of resin. The sea level slowly rose and covered the forests to form the present-day Baltic Sea. Through the millions of years of contact with air and water the tree resin oxidised resulting in the stable Baltic amber gems we know today.

Baltic amber has been historically significant dating back to prehistoric times. Small pieces of amber have been found inserted under the skin of ancient Egyptian mummies. The Egyptians believed in ambers power to stop destruction and decay. Amber amulets have also been found in ancient graves, where they were placed in order to protect the dead in the afterlife. The ancient Romans and Greeks believed in the magical power of amber. In 2010 scientists found the corpse of a young boy at Stonehenge dating back to 1550 BC. He was unearthed with a cluster of amber beads around his neck, which was used as a symbol of influence and power.

The earliest accounts of ambers medicinal properties are found in the works of Hippocrates (460 377 BC), who is known as the father of medicine and Pliny the Elder. Callistratus states that a short string of amber beads worn around the neck brought relief to the wearer in some cases of severe head, neck and throat complaints. Wearing amber bracelets was thought to be beneficial to sufferers of rheumatism and arthritis and reduced fatigue and feelings of general weariness. A similar effect was said to be achieved by rubbing the body with a fairly large piece of the mineral. Various other creams, balms and infusions of amber steeped in alcohol were also recommended for external use. All manner of concoctions, of which amber was the main ingredient, were also widely used to remedy respiratory complaints, asthma, bronchitis, bowel and bladder disorders, heart problems and ailments of the circulatory system.

In nineteenth-century literature we find evidence of amber having been used as a remedy for virtually all illnesses. Haczewski wrote that amber was one of the six more efficacious medicinal substances. Amber is the only stone to be of such great use in medicine.

In today's era, natural homeopathic remedies are in great demand. In the cosmetics industry, amber is used in an ever wider range of creams, tonics and treatments which are easily absorbed into the skins deeper layers. Baltic amber necklaces are sold in pharmacies in many European and Asian countries, and amber is an active ingredient in Chinese medicine. Baltic amber necklaces and bracelets are commonly used to relieve teething and growing pains for babies, as well as relieve colic, strengthen the immune system, and induce a calming effect.

Scientific research has determined that amber worn against the body releases natural oils onto the skin that are then circulated into the bloodstream. These oils induce a calming effect and have analgesic (pain relieving), antispasmodic (eases the muscles helping relieve colic and gas), and febrifuge (fever reducing) properties. The active ingredient in amber oils is succinic acid.

Note: HTML is not translated!